Avoid This #1 Mistake and You Will Be Rich

“To reduce risk, it is necessary to avoid a portfolio whose securities are all highly correlated with each other.” — Harry Markowitz

Yesterday I had the supreme experience of having lunch in La Jolla, California, with the father of modern portfolio theory, Harry Markowitz. He is considered to be a legend on Wall Street.

The lunch was arranged by Rob Arnott, a successful financial consultant who is known as “the godfather of smart beta.” He is also a strong advocate of value investing and will be a keynote speaker at this year’s FreedomFest. 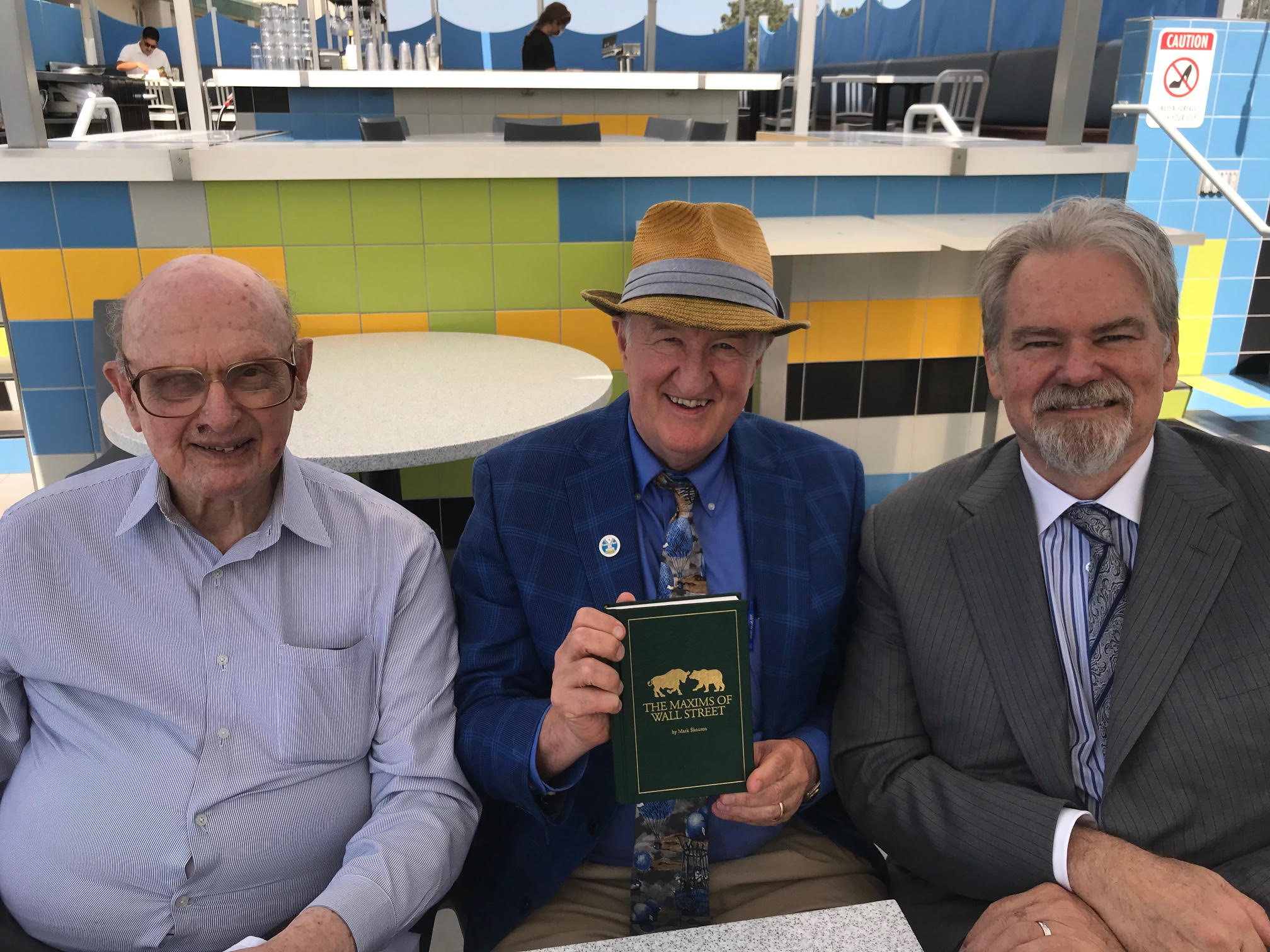 Your editor in between the Father of Modern Portfolio Theory and the Godfather of Smart Beta.

Markowitz is a legend in the investment world. He won the Nobel Prize in Economics in 1990 based on a single article he wrote in the Journal of Finance in 1952 called “Portfolio Selection.

The eureka moment came when he discovered that investors could increase their returns and reduce their risk by properly diversifying their portfolios into stocks, bonds and cash.

He wrote, “In choosing a portfolio, investors should seek broad diversification. Modern portfolio theory recommends that you diversify with a balance of stocks and bonds and cash that’s suitable to your risk tolerance.”

For example, during the stock market crash in March 2020, stocks fell and bonds rose. Thus, a portfolio of both stocks and bonds would have survived intact. Ditto for the financial crisis of 2008.

If you made the mistake of only being invested in stocks, you were in trouble. If you only invested in bonds, you missed out on the mother of all bull markets from 2009-2020. But by investing in both, you survived and prospered.

Markowitz’s message is clear. It’s vital to have non-correlated investments that move in opposite directions during crises. He states, “To reduce risk, it is necessary to avoid a portfolio whose securities are all highly correlated with each other.”

During the most recent bear market, most stocks, ranging from financials to utilities, fell together. However, many online-related tech stocks rose.

I brought up gold as an excellent non-correlated investment that often moves opposite to the stock market.  The precious metal has held up well in 2020.  But I was surprised to learn that gold doesn’t interest him.

Instead, he favors California’s real estate.  He has a condo on the beach, which he says is benefiting from rising demand and cheap mortgage rates.

Harry is amazingly alert for a man who is 92 years old. He was born in the year that Babe Ruth hit 60 home runs –1927!  He was two years old when the stock market crashed in 1929. He has lived through it all — World War II, the inflationary 1970s, the 1987 stock market crash, the dotcom boom and bust and the longest bull market in history.

What is the Most Important Lesson of Investing?

Markowitz has survived and prospered throughout the 20th and 21st centuries.  Near the end of our luncheon, I asked Harry what he thought was the most important lesson of investing after all these years.

He hesitated, so I suggested one of my favorite quotes from “The Maxims of Wall Street.”

Both Harry and Rob nodded in agreement. “That’s why diversification is so important,” stated Markowitz. “It reduces the risk.”

They were both intrigued by my new 7th edition of the “Maxims,” and we spent the rest of the time reading, smiling and commenting in response to various quotes from the book.

Here are some of their favorites:

“Psychology is probably the most important factor in the market and one that is least understood.” — David Dreman

Harry especially liked this one:

Harry was delighted to receive an autographed copy of my book.

Rob Arnott was so impressed that he decided to buy an entire box of 32 copies, which I sell for $300. He plans to give them out to his best clients.

I offer a super bargain price for the “Maxims.”  The first copy is $20, and all additional copies are $10 each. They make a great gift to friends, family, clients and investors.

I autograph each copy, number them and mail them at no extra charge. If you order a box (32 copies), you pay only $300.

Dennis Gartman said it best: “It’s amazing the depth of wisdom one can find in just one or two lines from your book.  I have it on my desk and refer to it daily.”

Jack Bogle, the legendary founder of the Vanguard Group, wrote, “What a treat! It’s great to have all these sayings in a single spot.”

Rob Arnott will be one of our featured speakers at FreedomFest from July 13-16 at Caesars Palace, Las Vegas.  He will speak on “Value Investing — Why It’s Not Dead” and will debate Steve Moore on “Inflation vs Deflation: What’s Ahead in the Economy and What It Means to Investors.” Both are not to be missed!

He will attend every day of FreedomFest.

Now for a special announcement: I am pleased to report that Dr. Drew, the famous M.D. and television personality, will be our keynote speaker at FreedomFest in Vegas, July 13-16.

Dr. Drew (Pinsky) is known for his outspoken views on the pandemic and his warning to the media to stop the hysteria. “Stop it, just stop it!” he warned.

He will give us the latest update on the COVID-19 virus. He is also an expert on addiction and the social impact of the lockdown.

He will be joined by Dave Rubin, the host of the popular online show “The Rubin Report” and the author of the bestselling book “Don’t Burn This Book: Thinking for Yourself in an Age of Unreason.”

Just in: Tom Woods, the top economist at the Mises Institute, will be the judge in the most important trial of the new decade: “The Pandemic on Trial!”

And Professor Allan Lichtman, the author of “Keys to the White House,” will give us his “surprise” prediction on the November elections! Right now, the election betting is showing that the Democrats are gaining on President Trump and the Republicans. The Democrats may even take the Senate! That’s why our emergency meeting, hosted by Steve Forbes, on July 13 is so important.

Here’s Your Chance to be a HERO

It is not often in life that you have a chance to make a difference in the world and proudly say, “I was there to mutually pledge my life, my fortune and my sacred honor” in defense of our First Amendment right to freedom of assembly.

FreedomFest will be the FIRST live conference in Vegas (if not the country). We are determined to defend our constitutional rights.

On this day, choose who you will serve — the state or the individual. Declare your independence in July.

Please read the “Open Letter to All Freedom Lovers” that can be found here.

FreedomFest starts next month. Caesars Entertainment is so thrilled to host the FIRST live convention in Vegas that it has moved our conference from the Paris Resort to their premier property, Caesars Palace.

It is rolling out the red carpet for YOU: Hotel rates have been cut to $119 a night at Caesars Palace. And they are only $57 a night across the Strip at the Flamingo Resort.

Plus, FREE PARKING is back!

Only 50 Tickets Remain for my 40th Anniversary Celebration!

We are filling up fast. So far, 150 people have signed up for the 40th anniversary celebration of my newsletter, and attendance for this special event and reception is limited to 200 subscribers. Everyone who attends will receive (a) a 2020 American eagle silver dollar, (b) an autographed, numbered copy of “The Maxims of Wall Street” and (c) the name of my favorite penny stock (it’s moving up!). Plus, a special reception will be held where attendees will have photo opportunities with celebrities such as Steve Forbes, Alex Green, Jim Woods, Hilary Kramer and others.

To sign up for FreedomFest and receive all three benefits, please click here. Or call 1-855-850-3733, ext. 202, be sure to mention you are a Investor Cafe subscriber and use the code FF20EAGLE. If you have already signed up, email me at mskousen@chapman.edu, and I will send you the name and symbol of the stock, as well as all the details.

To All Those Who Can’t Make It This Year

I know a lot of you are fearful of traveling or going to a conference this year. Please consider sponsoring students who want to come to this year’s FreedomFest. The price for each student is only $150. I’m hoping to bring a dozen students from Chapman University, but we need your help. To make a contribution, click on “rates” at www.freedomfest.com.

The overweening Governor Gavin Newsom here in California has mandated that all state universities (USC, UC Berkeley, etc.) stay locked down for the rest of the year. This means that they will have to teach online, despite all the evidence that young people are not threatened by the coronavirus.

But Chapman University, a private school where I teach, is bucking the trend and plans to open up for regular classes this fall. Good for them!

President Daniele Struppa was reluctant to close the campus in the spring semester, but was forced to do so under extreme pressure from students and parents. (By the way, President Struppa will be a speaker at FreedomFest — come join us and meet this hero of modern times.)

It turned out to be a rushed judgment, as the evidence is growing that the virus is no where near as fatal as was believed, especially among students. Even medical experts at Stanford University, the first major university that closed its campus, agreed that students should never have been sent home.

I taught the first half of my “Financial Economics” class in the spring in the classroom as I normally do. Yes, we had a few students who stayed home for a week with the flu. They were self-quarantined. Perhaps they had the coronavirus that originated in Wuhan, China. Who knows?

We were forced to go online, and I have to tell you, I hated it. Teaching on Zoom or Panpto can’t hold a candle to teaching in person and interacting with students. In their course evaluation surveys, students concurred. Online education is a poor substitute for the real thing.

I had an interesting experience last week. I had a total of 44 students in my spring course, and I needed to finish grading all of their work so that I could submit their final grades.

Only one student had an incomplete as I never received his 10-page paper. He had done all the quizzes and had taken the midterm and final, but I couldn’t find his paper. He was a football player who was a cancer survivor.

I made every effort to contact him. I called, texted and emailed him two to three times, with no response. I even called one of his football buddies, but he couldn’t reach him either. Finally, I tracked down his parents and left a message on their voicemail.

Then he said something I’ll never forget. He stated, “Prof. Skousen, I just want to thank you for going the extra mile for my son. I graduated from Ohio State, and I can tell you that no professor at Ohio State would have taken the time to reach out to a student. That’s what makes Chapman so special. My son will be back in the fall.”

We ended our conversation on a lighter note — I told him that my family and I are huge Gator fans and can’t stand Ohio State. We even had a good laugh talking about Coach Urban Meyer.

If you want to send your son or daughter to a great liberal arts college, you can’t do much better than Chapman University.