“The impact on the broader economy and financial markets of the problem in the subprime markets seems likely to be contained.” — Fed Chair Ben Bernanke on March 28, 2007 before Congress.

The Nobel Prize in Economics has once again been tarnished by giving it to Ben Bernanke, the former chairman of the Federal Reserve who oversaw the worst financial crisis since the Great Depression.

Not only did he not foresee the 2008 disaster, but he helped cause it, and then, as chairman, saddled the Fed with trillions of dollars in expensive mortgage and government debt. We have not heard the last of Ben Bernanke’s legacy.

Overall, there have been a great many good choices for the Nobel Prize over the years. My three favorites are Friedrich Hayek (1974), Milton Friedman (1976) and James Buchanan (1986).

Last week, I had the pleasure of spending time with Finn Kydland, the 2004 Nobel Laureate. I arranged to have him speak at the Mont Pelerin Society meetings in Oslo, Norway. He gave a great presentation on the need for a stable, long-term government policy that includes a low flat tax. He gave three examples of countries that have outperformed their regional peers because of what he termed “time consistency”:  Hong Kong in Asia, Ireland in Europe and Botswana in Africa. 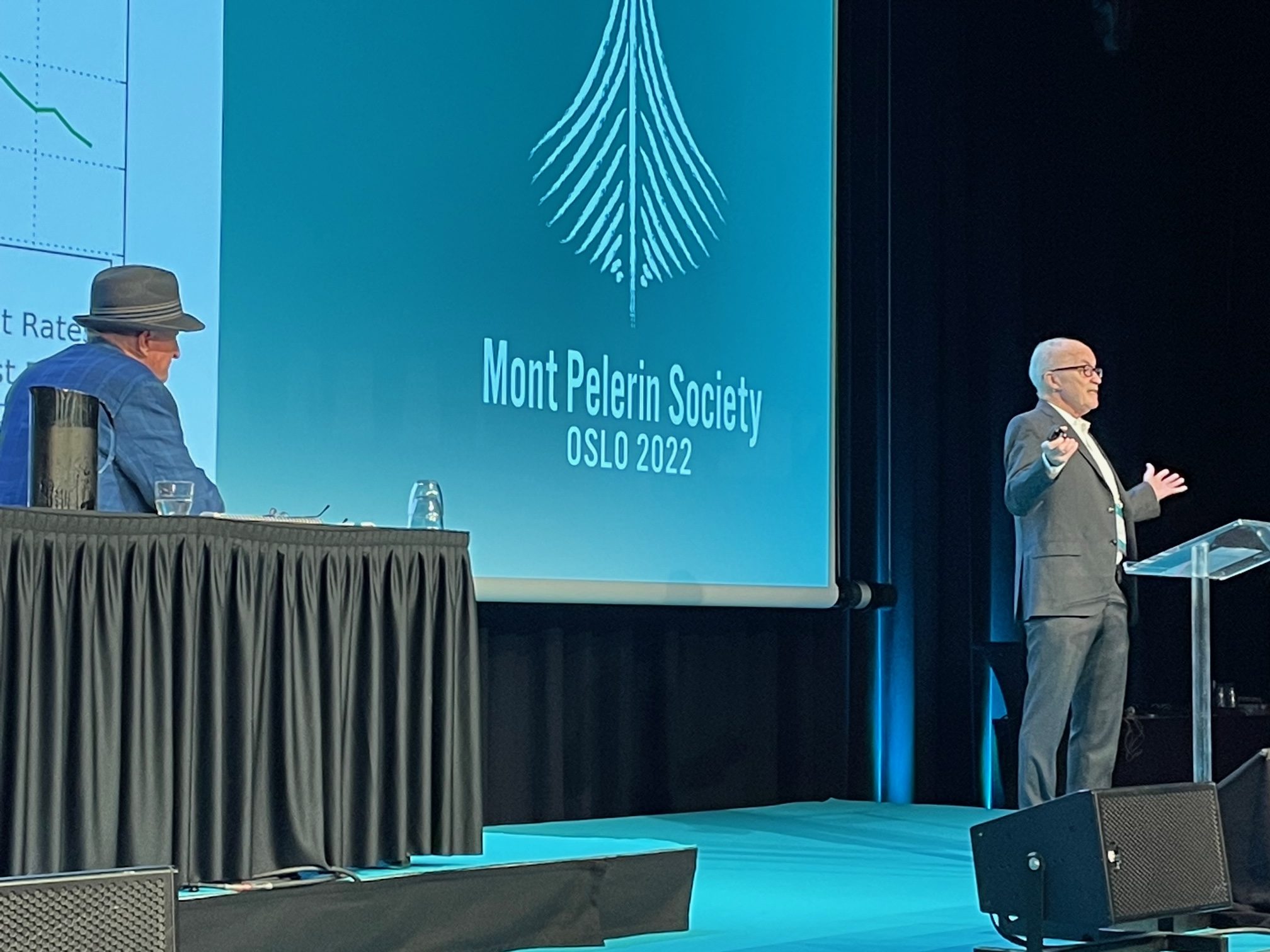 In1977, he and Edward Prescott wrote an influential paper entitled, “Rules Rather than Discretion,” where they concluded that “active” intervention by the federal government “may very well be dangerous and it is best that it not be attempted.”  Instead, “Reliance on policies such as a constant growth in the money supply and constant tax rates constitute a safer course of action.”

For this paper and another one, “Time to Build,” Kydland and Prescott were awarded the Nobel Prize in Economics in 2004. Well deserved!

Paul Krugman is not only too polemical in his attacks on his fellow economists, but he has repeatedly been wrong in his analysis. The latest example is his failure to recognize the return of inflation.

Berkeley professor David Card was granted economists’ greatest honor for his 1994 work on the minimum wage, arguing that the minimum wage did not cause unemployment in the fast-food business. Yet, his paper (co-authored with Alan Krueger) has been proven to involve shoddy empirical work that has been proven inaccurate by the Employment Policies Institute and other top economists.

Like many smart economists, Ben Bernanke did some great research earlier in his career on banking, credit and the Great Depression. But it’s a different story when it came to applying his knowledge to the real world as a member of the Fed, 2002-2005, and chairman, 2006-2014.

In 2002, he became famous as “Helicopter Ben” when he spoke favorably about the analogy of dumping cash into the economy from a helicopter. He then supported then-Fed chairman Alan Greenspan’s fateful decision to pursue loose monetary policies and his choice to cut interest rates to 1% in 2004 — all leading to the housing bubble and ultimately the 2008 financial crisis.

Did Bernanke Anticipate the 2008 Crisis?

Publicly, he made positive statements about the economy before the 2008 crash and seemed clueless that a financial hurricane was headed toward us. (See the quote above on the subprime mortgage crisis.)

But, Bernanke may have subconsciously anticipated the financial crisis. I was at a luncheon at the American Economic Association (AEA) in Chicago in January 2007, right after Bernanke became Fed chairman. He gave a speech entitled “Central Banking and Bank Supervision in the United States,” and the longer he spoke, the more I noticed he increasingly used the terms “crisis” and “panic.” I counted the number of times he used the words “crisis,” “risk,” “panic,” “threats” and “stress” — 36 times! He told us at the lunch that the Fed has set up a “crisis center” to handle potential global financial problems.

Unfortunately, he also knew about the subprime and no-doc loans going on in the mortgage industry and did nothing to stop it.

He wrote an entire book on the 2008 debacle entitled “The Courage to Act.” Yet he did not have the courage to stop the irresponsible mortgages of the era — a clear violation of the “prudent man” rule of banking.

As the chief banking officer of the United States, he should have been fired for his failure to stop this banking fraud, and should not have been rewarded with a Nobel Prize for such a failure.

The whole financial system almost collapsed under his watch. He later admitted that 12 out of the top 13 financial institutions were within two weeks of failing if the Fed hadn’t intervened.

He acted boldly and creatively, reaching out to Treasury Secretary Hank Paulson and Congress, which pushed through the $700 billion Troubled Assets Relief Program (TARP), including the bailout of Wall Street.

Under his watch, the Fed began the controversial new policy of “quantitative easing,” where the central bank bought up trillions in mortgage-backed securities and Treasury bonds.

In the end, the economy and the stock market recovered, and the TARP loans were paid off, but Bernanke’s actions left the economy in a slow growth mold and saddled the Fed with trillions in Treasury and mortgage-backed securities, now listed at $4.6 trillion.

QE may be the Achilles heel of the Fed, just as the national debt may be the burden that breaks the back of the Treasury someday.

I wouldn’t be selling your gold anytime soon.

Where EVERYONE is a ‘Global Warming’ Alarmist

“There is no greater obstacle to learning than to be the prisoner of totally invalid but dogmatic theories.” — Peter Drucker

In my recent visit to Norway, I was surprised to learn that virtually everyone in Europe is a “global warming alarmist” who supports the goals of zero “net carbon” emissions, renewable fuels and other “green” technologies. That includes members of the Mont Pelerin Society, who are known for their free-market views. One told me that he considers global warming the greatest threat to the world today, more than nuclear war.

In the United States, almost everyone thinks that hurricanes, tornadoes and other natural disasters are getting more destructive and intense, all due to global warming. Even President Biden blamed “climate change” for the destruction that Hurricane Ian wrought in Florida last month.

Marian Tupy, a Cato Institute scholar and co-author of the grand new book “SuperAbundance,” told me that the number of people dying from hurricanes, earthquakes and other natural disasters is at an all-time low. I looked it up and he’s right. See this chart. 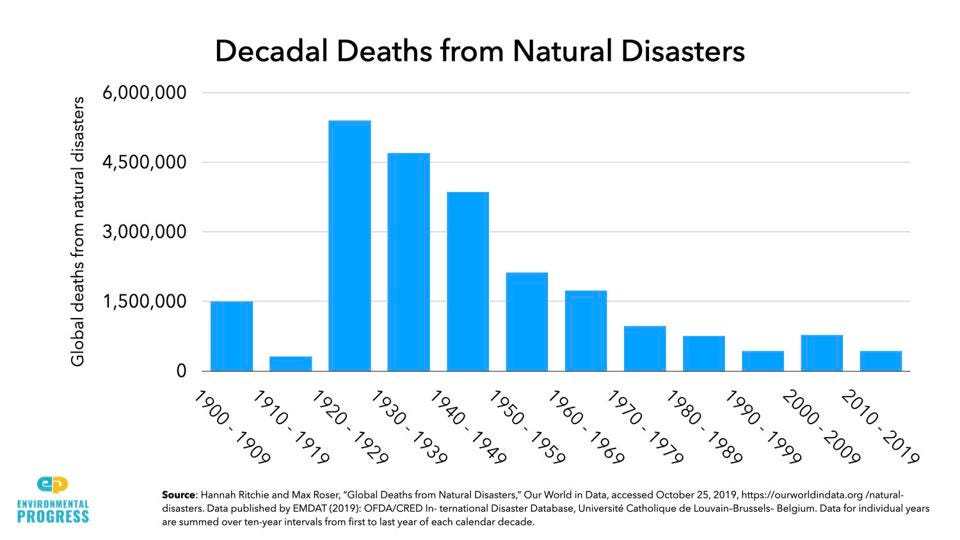 So maybe things aren’t as bad as they say they are.

It’s also a fact that air pollution in Europe and North America has declined sharply in the past 100 years. The emissions problem persists in China and emerging markets, but not in the developed West.

Despite these positive trends, Europeans, and even many Americans, especially teenagers, are living in utter terror, fearing that world temperatures are likely to increase by 2% or more in the next decade, creating disaster for the planet. Florida will be underwater in a decade, they predict.

I’m more in Bjorn Lomborg’s camp.  He’s the author of “The Skeptical Environmentalist” and “Cool It.” He challenges mainstream concerns about development and the environment and points out that we need to focus our limited resources and attention on the smartest solutions first.