My Encounter with Elon Musk, the World’s Richest Man

Last Friday, my wife and I attended the annual Baron Investment Conference in New York City. The surprise CEO was none other than Elon Musk, CEO of Tesla and SpaceX. Ron Baron is a big fan, and his Baron funds are the largest shareholders. Ron considers Musk a modern-day Leonardo de Vinci.

After Ron Baron’s half-hour interview with Elon was over, I was given the opportunity to ask him a question.

I started off by quoting the Roman philosopher Seneca from “The Maxims of Wall Street,” p. 142: “There is no great genius without a touch of madness,” to which he responded, “I like the madness part!”

Apparently, there is a method to his madness, given the success of Tesla. As Ron Baron said, “Without Elon Musk, there would be no EV market. He has accelerated the growth of sustainable energy.”

I show up twice in the video: around seven seconds into the clip, a picture of me in the audience, wearing my signature hat; then my question to Mr. Musk starts at around 52-53 minutes into the interview. My question and his response lasted about three minutes.

I was only one of two people out of 5,000 who got to ask a question. I felt like I had won the lottery, although I did not win either of the two Teslas given away after Musk spoke. It must have been my hat trick!

In response, Elon was overjoyed that the EV market has grown dramatically, but, he said, Tesla has the advantage and is years ahead of the competition. He said that it’s no longer about just electric vehicles (EVs), but Tesla is five years ahead of everyone on self-driving vehicles, robotics and other technologies.

He also said that all the top engineers from ivy league schools want to work for Tesla and SpaceX. They are finding new ways to eliminate “useless” parts in automobiles. Tesla is working on a cheap X model that will sell for around $20,000 but didn’t say when.

Musk’s takeover of Twitter was brought up at the meeting. He said that Twitter “could be one of the most valuable companies in the world as the digital town square” but the old model was broken and was losing money. He’s working on a new model that hopefully will be profitable. He’s getting rid of the spam and fraudulent accounts by creating “verified users” and charging $8 a month (called “Twitter Blue”).

His biggest challenge is responding to all the big advertisers who are canceling their contracts with Twitter in response to radical activists who hate Musk for bringing back free speech on social media. He is adopting “moderate” rules that will satisfy 80% of Twitter users, but not extremists who engaged in “hate” speech.

The Twitter controversy has been a major distraction. He admitted that taking Twitter private has increased his workload to 120 hours a week, but he’s convinced that a successful model for Twitter can be done in fairly “short order.”

On Monday, he wrote on Twitter, “While it’s true that I’ve been under unfair & misleading attack for some time by leading Democrats, my motivation here is for centrist governance, which matches the interests of most Americans.”

His posts about politics and the midterms followed several tweets on Monday when Mr. Musk urged his followers to vote Republican because “shared power curbs the worst excesses of both parties.”

Meeting Up with Ron Baron 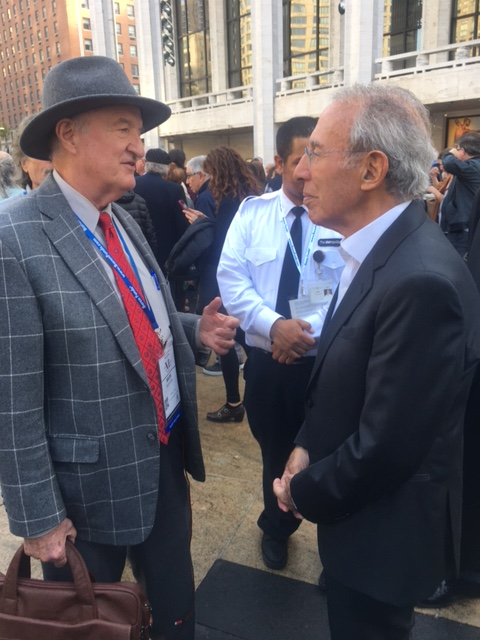 After the event, I met up with Ron Baron and asked if he had ever lost faith in any of the business managers he had recommended, forcing him to liquidate his position. “Yes, but only a small percentage, in single digits.” Clearly, Elon Musk is not one of them. He thinks the future is bright for Tesla, Space X, and his other ventures.

I make no secret that I am an investor in the Baron funds, which have outperformed the market for years. I have a couple of great quotes in “The Maxims of Wall Street” from Ron Baron, who is celebrating his 40th year of money management. His most famous quote is “I invest in people, not businesses.” (“Maxims,” pg. 70).

At the conference on Friday, I picked up a new Baron quote, “We’re not renters of stocks, we are owners of businesses.” It reminds me of Peter Lynch’s famous line, “Although it’s easy to forget sometimes, a share of stock is not a lottery ticket. It’s part ownership in a business.” (“Maxims,” pg. 158)

Dozens of Subscribers are Buying ‘Maxims’ for the Holidays 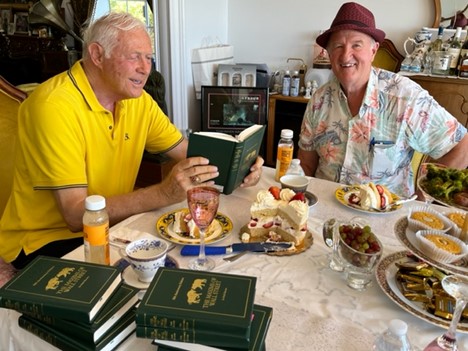 I’m delighted that many of you are ordering one or more copies of the “Maxims” as gifts for the holidays. This week alone, I received multiple orders for one book, four books, 11 books and a whole box of 32 copies.

The price of the 10th-anniversary edition is only $20 for the first copy and $10 for all additional copies. A whole box of 32 copies is priced at just $300. I autograph and number each one, and even mail them at no extra charge if the address is inside the United States. To order, go to www.skousenbooks.com.

Special Note: I was interviewed on Addison Wiggins‘ show “The Wiggins Session” on my birthday, Oct. 19. It starts off with a nice summary of gross output (GO), my new macro statistic. Go here to watch it! 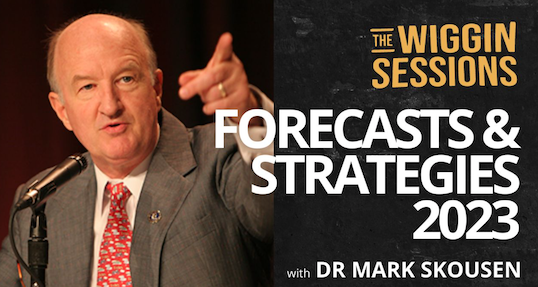 Addison states, “Mark and I have been colleagues for a long time; he is among the closest people to a living Milton Friedman as you can get.”

“In this session,” Addison adds, “we talk about:

– Gross Output (GO), Mark’s breakthrough measure of total spending in the economy and the “top line” in national income accounting.

– Sing Sing… or teaching economics to prisoners (there is a lot to learn from the imprisoned, the extended metaphor does not escape me).

– The Mt. Pelerin Society — 36 scholars invited by Professor Friedrich Hayek to meet at Mont Pelerin near Montreux, Switzerland, to discuss the state and the possible fate of liberalism (in its classical economic sense) in thinking and practice in 1947.

– The success of his annual conference FreedomFest, and its impact on the freedom movement.”

Earlier this year, I sent out a promotion for my newsletter called “The Biden Disaster,” referring to the growing problems America faces — double-digit-percentage inflation, excessive regulation, higher taxes and a bear market on Wall Street.

This week we witnessed “The Trump Disaster Plan.” Republican leaders chose weak candidates to gain control of the Senate. So far not a single Republican (all endorsed by Trump) has won a seat by an incumbent — in Georgia, Pennsylvania, Arizona or Nevada. As a result, it looks the Senate will remain in the hands of the Democrats.

But not all is lost. Republicans can put up great candidates, such as Gov DeSantis in Florida, Sununu in New Hampshire and Senator Rand Paul in Kentucky.

And the House may well end up controlled by the Republicans.

Let’s hope Trump sees the writing on the wall and learns a lesson from General Douglas MacArthur, who considered running for the highest office in the land but ultimately decided to retire and write his memoirs: “Old soldiers never die, they just fade away.”

Trump needs to fade away and make room for a new generation. The future belongs to this man: 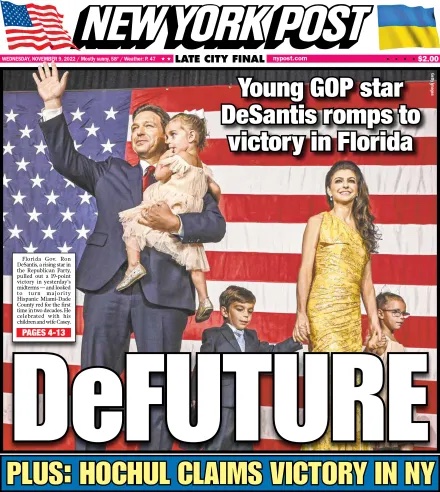 I see the betting odds have changed dramatically after Tuesday’s election results: 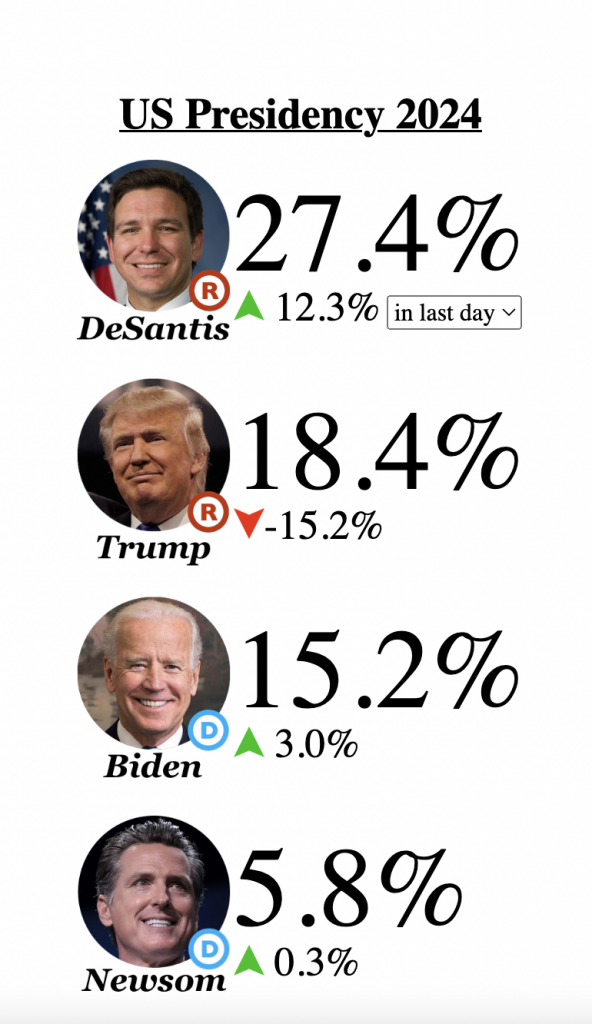