When the market plunged on Monday, the situation reminded me of the classic book, “Don’t Sell Stocks on Monday,” by Yale Hirsch. 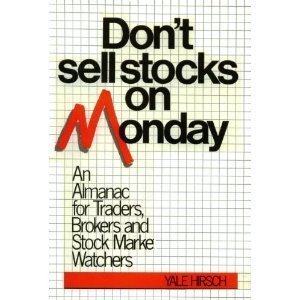 Yale is now in his nineties. His son, Jeffrey Hirsch, who speaks regularly at the MoneyShow, says he is doing well and hopes to celebrate his 100th birthday.

In his book, Yale points out the startling contrast between the first and last trading days of the week.

I summarize his advice to short-term traders in my own book: “Buy on Monday, sell on Friday.” (“The Maxims of Wall Street,” p. 133).

Mondays are a great time to buy stocks, especially on a down day. This is because if the market is down sharply, stocks are likely to rebound.

And that’s exactly what happened this week. The market plunged on Monday, and it has recovered ever since.  I often buy stocks on Monday in my trading services, and the results have been spectacular.

The Financial Crisis in China and America

Stocks fell for two reasons. One reason was that Evergrande, China’s second-largest property developer, announced that it couldn’t make debt payments on its $303 billion in liabilities. It is threatening to declare bankruptcy.

In addition, Congress is facing another fight over raising the debt ceiling. The Republicans are holding Biden and the Democrats hostage over their radical agenda to raise taxes and engage in billions of wasteful boondoggles.

Could these two factors, as well as a never-ending pandemic, disrupt the fragile economic recovery both here and abroad?

Dennis Gartman, the commodity guru, warns in “The Maxims of Wall Street,” “There’s always a bigger junkyard dog,” meaning there’s never one crisis.  There’s always another crisis around the corner that can precipitate a bear market. It’s like the series of hurricanes that are hitting the East Coast.

Bull markets climb a wall of worry, and there is plenty to worry about.

However, the Evergrande collapse may be “too big to fail,” and most analysts expect Beijing to intervene and bail out Evergrande under its state capitalism model.

Meanwhile, back in the West, most banks and financial institutions are in much better shape since the 2008-09 financial crisis, with higher levels of capital reserves and more cash.

As to the stalemate over the debt ceiling, history demonstrates that the market pays little attention to this frequent game on Capitol Hill.  Let’s face it.  Congress is not going to jeopardize the economy for very long.

Sometimes, it’s best to buy when the market is down. September and October are notorious for being violent months, but then there’s a recovery during the holiday season.

As Dennis Gartman states, “Bear markets are more violent than bull markets, and so are their retracements.” (p. 212, “Maxims of Wall Street”).

This is another example of seasonal investing. It’s a good time to buy on Mondays… and in September and October.

Earlier, I quoted Dennis Gartman, the commodity guru, a couple of times. He’s a big fan of my book “The Maxims of Wall Street,” now in its 10th-anniversary edition. He says, “It’s amazing the depth of wisdom one can find in just one or two lines from your book. I have it on my desk and refer to it daily.” 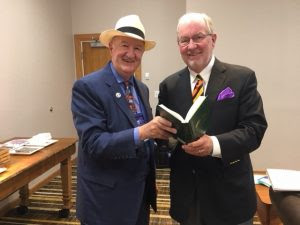 Dennis Garman examines a copy of the “Maxims”.

If you would like to buy one or more copies, go to www.skousenbooks.com. The retail cost is $24.95, but you pay only $20 for the first copy and $10 for all additional copies.

They make an ideal gift to friends, relatives, stockbrokers or clients.

I pay postage if mailed in the United States, and all copies are autographed and numbered. (Add $20 to mail to Canada or overseas.)

Update on the New Orleans Conference

I’m still planning to speak at the New Orleans Investment Conference, but it will be via Zoom, not in person.

The overzealous government authorities have imposed a mask mandate on all hotel conventions there, and Brien Lundin, the producer, fears that they will enforce this regulation.

As subscribers know, I don’t believe in mandates, forcing people to wear masks or to get vaccinated. (See my pamphlet, “Persuasion vs. Force,” here.)

Wearing masks at a business meeting makes no sense. How are you supposed to have a real discussion without knowing how people are reacting? I feel the same way about students in the classroom.

I was able to show up mask-free at the Las Vegas MoneyShow last week at Bally’s/Paris Las Vegas, as officials there did not hassle us in the convention hall. I was no threat to anyone nor was I worried about getting the virus, since I’ve been vaccinated and have built up immunity since recovering from COVID-19 last month.

I will be at the New Orleans Conference via Zoom on my birthday (Oct. 19) to discuss the significance of the October 19, 1987, crash… Other speakers include former congressman Ron Paul, Jim Grant, Rick Rule, James Rickards, and Brien Lundin… To register, go to www.neworleansconference.com, and be sure to mention you are a subscriber to Investor Cafe by clicking here.

P.S. Come join me and over 60+ top trading and investing educators as we share our favorite strategies that are working for us right now. The Wealth365 Summit is the biggest and most prestigious trading and investing summit in the world and this is the hottest ticket this fall. You won’t want to miss it. Plus, it’s 100% free to attend and the $250,000 in prizes is pretty awesome too. CLICK HERE to register for the October Wealth365 Summit now! I’ll see you there!

George Foreman Lost to Mohammed Ali and Won Over America

I’ve been watching the new Ken Burns documentary on Mohammed Ali, and it reminded me of FreedomFest 2016, where both George Foreman and Don King spoke.

Both appear prominently in the Ken Burns film. The appearance of George Foreman and Don King was a highlight in my life… what a fun evening. 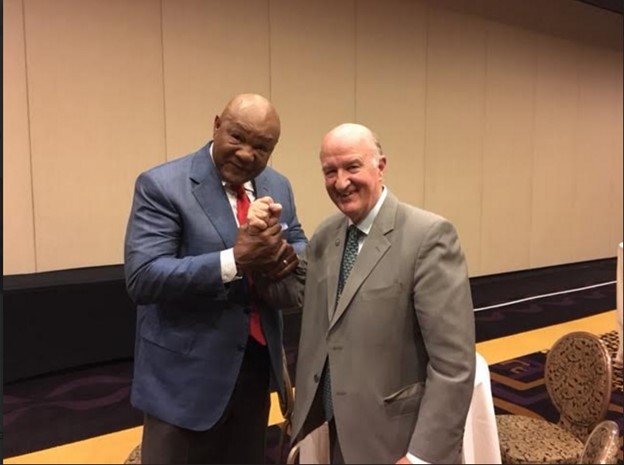 George Foreman meets with Mark Skousen at FreedomFest in 2016.

Foreman gave the best motivational speech I’ve ever heard at FreedomFest, telling the audience how he became a great boxer, entrepreneur and evangelist.

I’ll never forget Foreman telling me before his speech, “Please, no political questions, I don’t talk politics.” But the last question he was asked by the audience was a woman who wanted to know, “Mr. Foreman, what’s your opinion of Black Lives Matter?”

I will never forget Foreman’s response.

In essence, he said, “Well, I grew up dirt poor in the worst crime area of Houston, Texas, and became the heavy weight champion of the world. The United States of America is the greatest country in the world. Does that answer your question?” 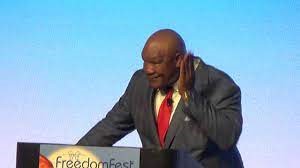 He got a standing ovation.

You can hear Foreman’s speech and all other FreedomFest sessions by going to www.miracleofamerica.com.