“What’s the definition of a statesman? A retired politician!”

One of the biggest complaints about Congress these days is that it is dysfunctional and that Republicans and Democrats don’t work together for the betterment of our country. Is bipartisanship a lost art that we should return to?

The Golden Age of Bipartisanship

To answer that question, here is the story of two famous senators who effectively worked together to make a difference.

The Center for Legislative Effectiveness, a non-partisan research institution at Virginia and Vanderbilt universities, ranks how effective legislators are, as measured by the number of “substantive and significant” bills the members sponsored that became law.

It turns out that since 1973, the two most effective legislators were Senators Orrin Hatch, Republican from Utah, and Ted Kennedy, Democrat from Massachusetts. Hatch was #1, and Kennedy was #2. 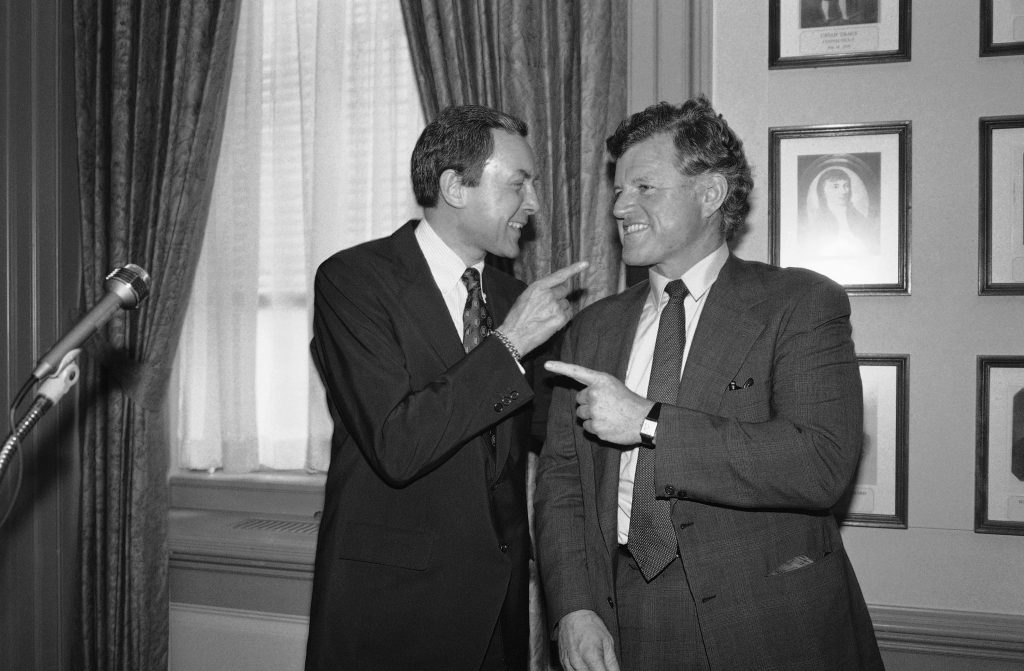 Sens. Kennedy and Hatch were the odd couple on Capitol Hill: Democrat and Republican. Catholic and Mormon. Whiskey and water.

Despite their seismic differences in political philosophy, they were close friends who worked together to produce some of the most consequential legislation in history, including the Americans for Disabilities Act, the Children’s Health Insurance Program, the Ryan White CARE Act (HIV/AIDS research and funding), No Child Left Behind Act, the Religious Freedom Restoration Act and the approval of some Supreme Court justices.

I knew both Kennedy and Orrin Hatch. I could never shake hands with Ted Kennedy. I thought he should have resigned in 1969 after he drove his car off the Dike Bridge on the tiny island of Chappaquiddick, Martha’s Vineyard, resulting in the death of Mary Jo Kopechne.

Nevertheless, Kennedy survived the tragedy and continued on as the senator from Massachusetts.

The Hatch-Kennedy relationship is described in detail in William Doyle’s new book, “Titan of the Senate.” The highly recommended book can be purchased on Amazon.com. 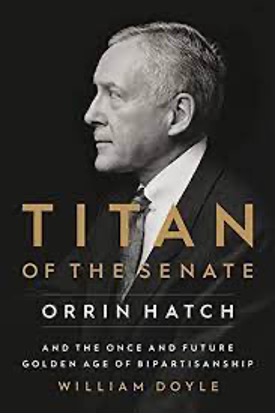 When Doyle discovered Hatch’s #1 status as the most effective legislator ever, he decided to write a whole book about his achievements.

The Orrin Hatch story is a remarkable success story. He grew up dirt poor in Pittsburgh, Pennsylvania; his parents were active Mormons (my mother and the Hatches were in the same congregation). Orrin had a strong drive to succeed, and after his service mission and receiving his law degree, he started a practice in Salt Lake City, Utah. Novice Orrin Hatch was only 42 when he won the Senate race in Utah against veteran Frank Moss. My uncle, Cleon Skousen, and his Freemen Institute helped him get elected. Hatch always said his support made the difference.

My Friendship with Senator Hatch

My wife and I have known Orrin Hatch, his wife Elaine, and their children since they became members of our church in Vienna, Virginia, in 1977. I was the Sunday school president at the time, and I asked him to be the adult Sunday school teacher, a position he held for some 30 years. He was a good Christian man.

We spent time together, including Thanksgiving dinner, and I wrote a few speeches for him. My wife, Jo Ann, helped their son Scott graduate from high school. Scott worked for my mail-order business. My brother Jamey dated the Hatches’ daughter Marci a few times.

Orrin was a personal friend for 35 years. When he died earlier this year, at age 88, it was the end of a chapter in my life; I attended his funeral in Salt Lake City. He is deeply missed. We dedicated a room to him at this year’s FreedomFest.

Orrin portrayed himself as a staunch believer in limited government and the Constitution. But he proved to be a controversial deal-maker in the Senate, which caused my uncle Cleon to question his motives, especially in his collaboration with Ted Kennedy.

Like many Republicans, including President Reagan, he promised to eliminate the Department of Education but then voted for its extension.

In 1979, Chrysler Corp. asked Congress for a $1.5 billion bailout, and Senator Hatch told me he was seriously considering voting in favor. I told him, “Go ahead, Orrin, but if you do, please don’t ever call yourself Mr. Free Enterprise.” He ultimately voted against the bailout.

He was a major supporter of the 1981 Reagan tax cut, which he called the Kemp-Roth-Hatch bill. Afterward, I had a run-in with Senator Hatch when I found out he supported the TEFRA tax hike in 1982. TEFRA (misnamed the Tax Equity and Fiscal Responsibility Act) was pushed through by Senator Bob Dole, known as “Senator Tax,” after President Reagan signed the 1981 tax cut. It includes a provision to force taxpayers to withdraw funds from their IRA or 401(k) when they turn 72, known as “Required Minimum Distribution,” or the hated RMD, that we still suffer from.

I told Sen. Hatch that TEFRA was a betrayal of Reaganomics and supply-side economics, but he wouldn’t listen. He practically bit my ear off. He voted for the bill, and Reagan held his nose and signed the legislation into law.

Orrin and I never talked politics after that. But we stayed in touch meeting up at Utah Jazz games or social visits to his office in Washington, or his home in Northern Virginia. His first question was, “Where’s my silver dollar?” and always requested copies of my economic and financial books. “I read every one,” he said.

He would often call us at Christmas time. We stayed at his home in Vienna during the inauguration of President George W. Bush in 2001. Orrin spoke at my uncle’s funeral in 2006, and visited his widow, Aunt Jewel, in Salt Lake City after Cleon died. 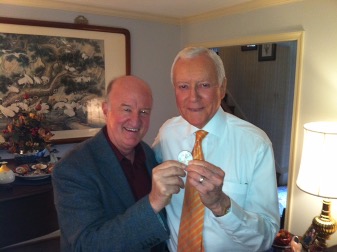 Bill Doyle, the author of “Titan in the Senate,” gives Senator Hatch high marks for both domestic and foreign policies, in particular, his support of Israel, and his pushing through the Americans for Disabilities Act and other definitive legislation.

The ADA has proven beneficial to the estimated 61 million handicapped Americans by providing easy access to public transportation, stores and government buildings. But it has come at a high price tag, hurting small businesses, hotels, apartments and institutions that can’t afford compliance and petty lawsuits.

From my perspective, Senator Hatch did a lot of good, including his fight for tax reductions, his fierce defense of Supreme Court Justice Clarence Thomas and his fight to keep the Food and Drug Administration (FDA) from regulating vitamins.

The American Conservative Union (ACU) gave him an overall 87% approval rating in his seven terms in office. He holds up well compared to other Republicans. Here are their lifetime ratings by the ACU:

Senator Hatch did have one major regret. Every year, he would support a balanced budget/tax limitation amendment to the Constitution, but his unique skills of persuasion failed him on this vital issue.

Here are three charts that tell the story of Senator Hatch’s tenure as senator (1977-2019): 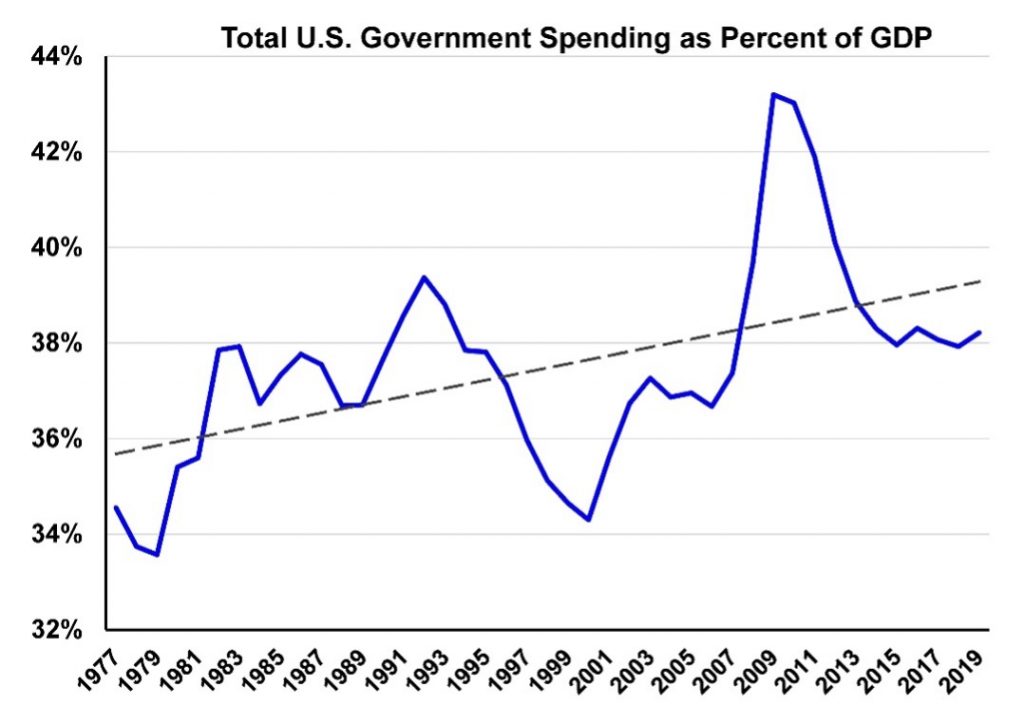 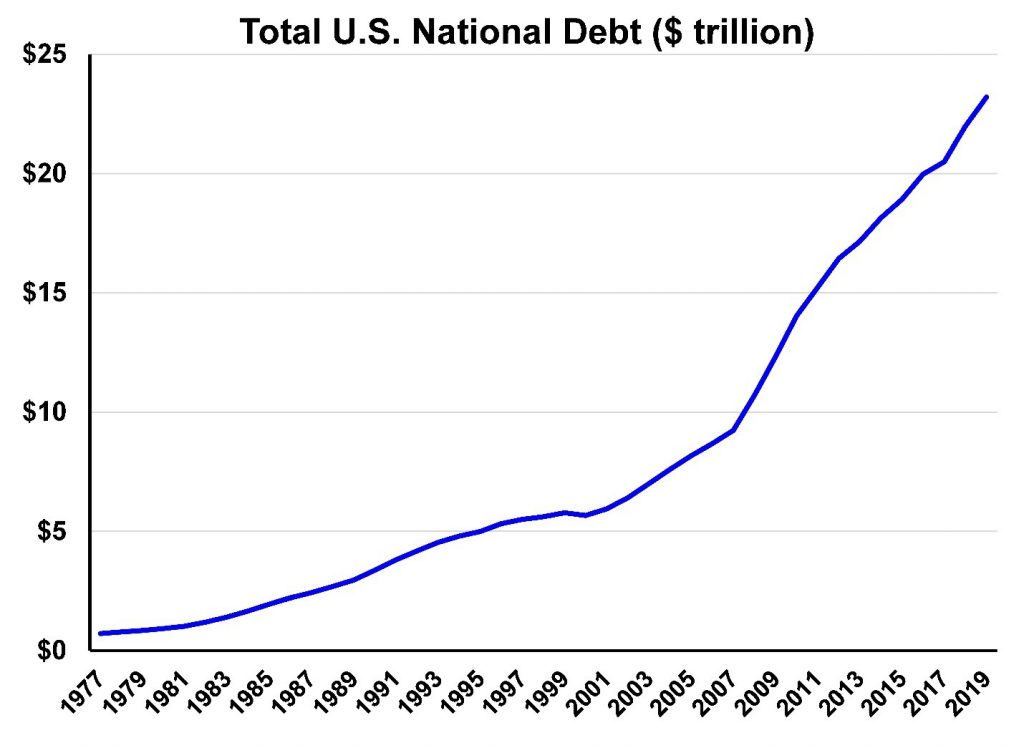 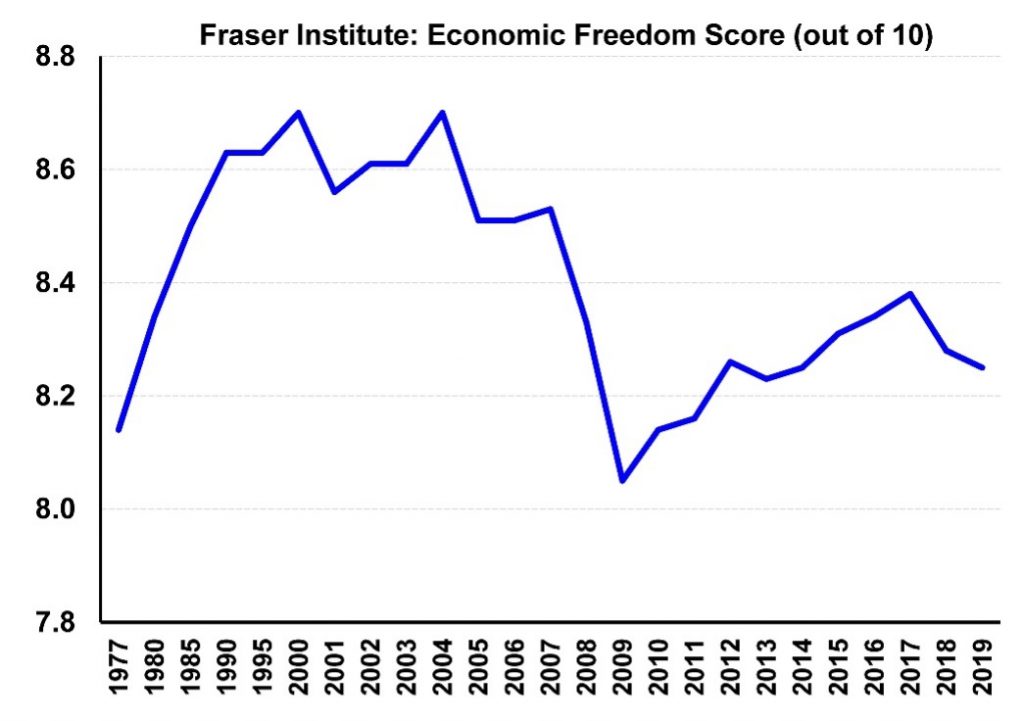 On these macro measures, Senator Hatch fought an uphill battle and lost. The government and the national debt kept growing during his time in Washington, and economic freedom in the United States declined. His legacy includes many great contributions but adding to the national debt and big government was not one of them after 42 years in the premier governing body of the United States.

On the positive, the stock market boomed, so not all is lost. 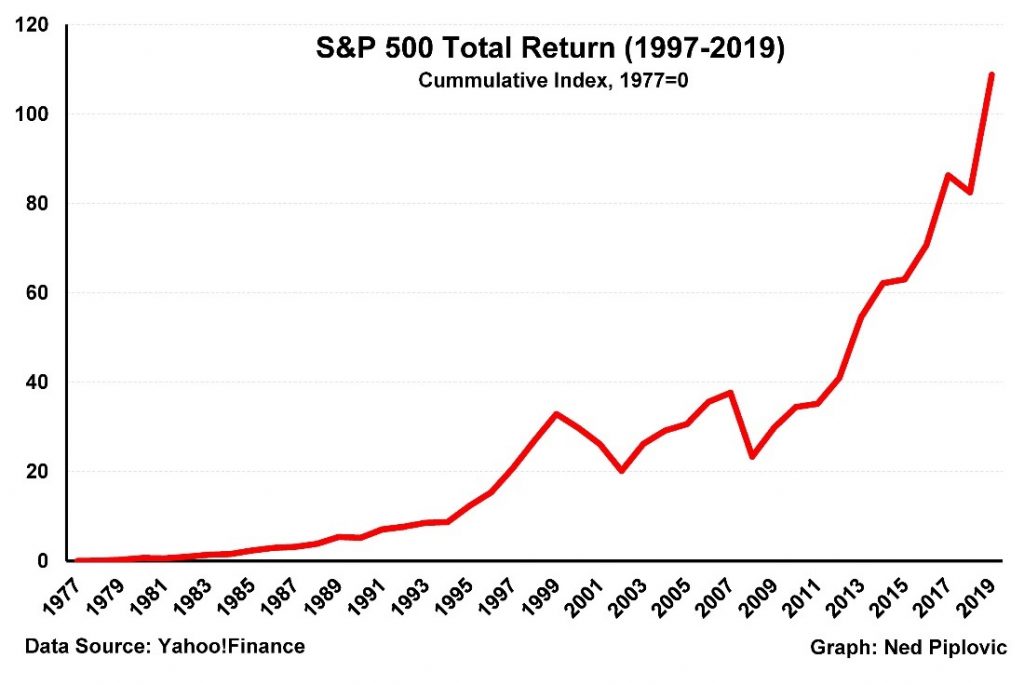 A Personal Thank You

Last week, I heard from many friends, family and subscribers on my birthday, Oct. 19, and I appreciate it. With my family scattered around the country, Zoom came in handy to be able to see my children and grandchildren online. Isn’t technology great?

My wife, Jo Ann, gave me a director’s chair in honor of my new appointment to the Doti-Spogli Endowed Chair in Free Enterprise at Chapman University. 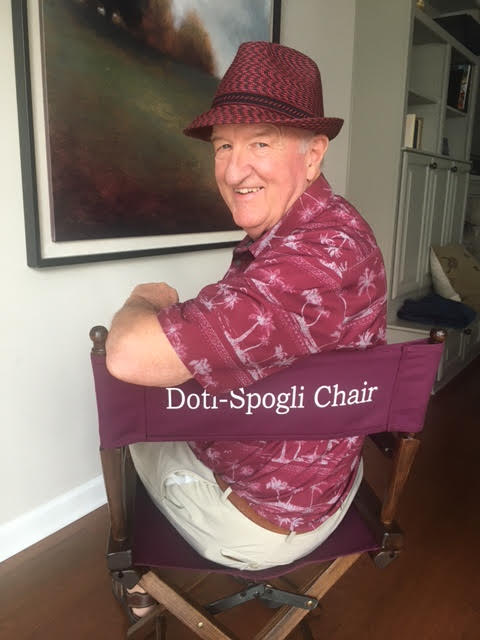 I look forward to seeing many of you at the upcoming Orlando MoneyShow. See the details immediately below.

The Government Can No Longer Hide

“A virtuous and industrious people may be cheaply governed.” — Benjamin Franklin

Back in the 1970s and 1980s, Senator William Proxmire, a Democrat from Wisconsin, was famous for exposing wasteful spending by Congress, especially in the military. He gave out the annual Golden Fleece Award for the federal agency that financed the most egregious form of waste.

Senator Proxmire retired in 1989 and died in 2005, but today’s examples of waste, fraud and corruption are 100 times bigger than in Proxmire’s day.

Fortunately, we have a man who has taken on the political machine. He’s not a politician, but a citizen who is making a difference.

Adam Andrzejewski may have a last name that is hard to pronounce (Angie-eff-ski), but his message is easy to remember: exposing the outrageous waste, fraud and corruption in federal and state governments, of both Democrats and Republicans. He recently went after Democrat vice president Jill Biden and Republican governor Kristi Noem, among others. 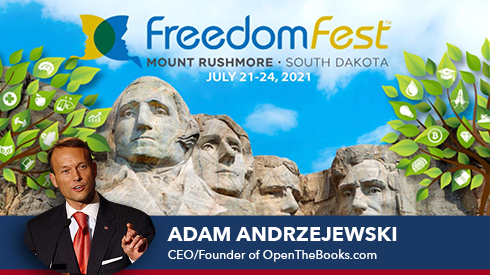 He spoke at our FreedomFest conference in South Dakota in 2021 and will be speaking again at FF in Memphis next year.

He is an electrifying speaker. I highly recommend you listen to this recent talk he gave at Young Americans for Freedom (YAF) in California: Exposing Government Waste and Corruption ft. Adam Andrzejewski – YouTube.

His message isn’t all negative — he’s had some real victories (such as opening the books in California) and his revelations have resulted in several prison sentences for government officials. He deserves our support and encouragement.

I recommend you stay in touch at www.openthebooks.com.