The Billionaire’s Paradox: What I Learned From the Forbes 400 Richest People in America

“The years roll around and the last will comes; when I would rather have it said, He lived usefully, than he died rich.” — Ben Franklin 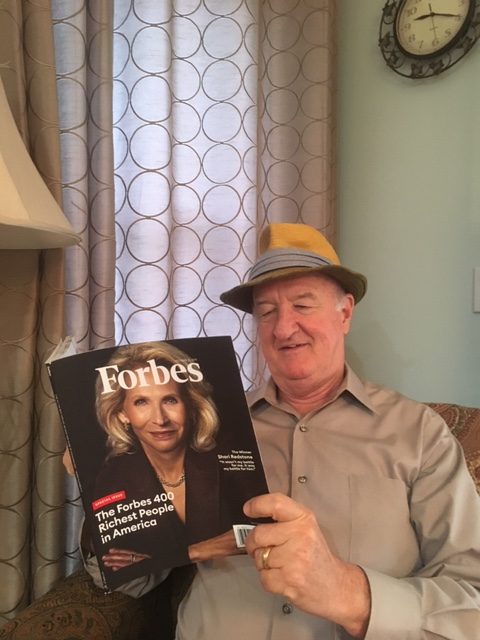 The American dream is a paradox. People are glorified who live long and die young (note the admiration of celebrities who died young like Marilyn Monroe or Elvis Presley).

It is praiseworthy to be rich like the Forbes 400 Richest People in America… but there is now a growing call to tax successful people to death and to force them to pay their “fair” share! Even the “super rich” are hypocritical.

Warren Buffett, the world’s most successful investor has begged Congress to raise his taxes while his company, Berkshire Hathaway, continues to fight the IRS on the taxes it owes.

Throughout my career as an investment writer, I’ve gotten to know and meet about 5% of the Forbes 400 Richest People in America in person. Over the past year, I have interviewed:

— Discount broker innovator Charles Schwab, #63 on the list, worth $7.7 billion. My interview with him can be seen here.

I’ve collected all 37 issues of the annual “Forbes 400 Richest People in America,” and I learn a lot from reading the content.

What’s the #1 most important lesson?

There are many ways to climb a mountain, and the technique changes over time. In the early editions, the richest people made their money in manufacturing. The next waves of wealth came from real estate and then technology. But lately, due to the rise of stock prices, finance and investments have suddenly become the biggest source of billionaire wealth, outranking real estate and technology.

This year, billionaires needed to make $2.1 billion to make the cut, just as they had to last year.

Usually, when people become politicians, they make money. This is especially true after they leave office. However, in the case of Donald Trump, his fortune has declined sharply from $4.5 billion to $3.1 billion since 2015, when he started his divisive campaign to become president.

The latest issue of the Forbes 400 Richest People in America issue is out now, and I’m found on page 22.

No, I’m not a member of the exclusive Forbes 400 Richest list. I’m a millionaire, not a billionaire. Not very many Americans can be a public intellectual and super rich. It’s a trade-off. I prefer my freedom from day-to-day business operations so that I can write, teach and speak.

Steve Forbes’s column on gross output (GO), my new supply-side statistic that is now published by the federal government. Mr. Forbes is a big fan and thinks that GO is a much better measure of the economy than gross domestic product (GDP). He says that GDP is like an X-ray of the economy but GO is a like a CAT scan. I urge you to read his column on GO by clicking here.

My GO Model Proves to Be Right Again

Good news! The federal government released second-quarter gross output (GO) on Tuesday. Real GO for the second quarter rose by 2.0%, which is more than the previous quarter. Adjusted GO, which is a more comprehensive measure of spending at all stages of production, rose 2.9% in real terms. Nominal GO was up 4.9%!

Overall, the report was quite positive and suggests a recovery. There is no recession in sight.

Note that manufacturing was flat, but services and government spending were up sharply.

GO is also a great leading indicator of economic growth.

According to David Ranson, chief economist at HCWE, Inc., GO is a good leading indicator of the next quarter’s GDP.

Sure enough, the federal government released third-quarter GDP yesterday, and it was up 1.9%, 20% better than what the economists had predicted.

My GO model worked again! My press release on GO can be found by clicking here.

The Fed announced another 0.25% rate cut on Oct. 30, but I think the evidence is growing that another rate cut is unnecessary. The economy is recovering and stocks are heading higher.

This weekend (Nov. 2-4), I’ll be speaking at the famous New Orleans conference, the annual gathering of gold bugs. My topic will be “The Wall Street Bull versus the Golden Bear: Who’s Winning?” You won’t want to miss it.

If you are coming to New Orleans this weekend, please email me at mskousen@chapman.edu. I’d like to say hello to all my subscribers who are attending. Thanks.

All details can be found at neworleansconference.com/noic-promo/skousen/.

Be sure to mention you are a subscriber to Investor Cafe! And if you can’t make the show, you can still catch my newest investor presentation right here (it shares details on my largest private IRA holding). Click here to view.

Democrats Want to Eliminate Billionaires, Soak the Rich and Destroy the American Dream

“There should be no billionaires. We are going to tax their extreme wealth and invest in working people.” — Senator Bernie Sanders

Sen. Bernie Sanders is a genuine socialist. He hates wealthy people, even though he is worth an estimated $2.5 million and is one of the 1%.

I had to laugh when he said he would use those taxes to “invest in working people.” That is exactly what billionaires do. Amazon (NASDAQ:AMZN) invests in a million workers. Microsoft (NASDAQ:MSFT) has made 12,000 employees millionaires. Home Depot (NYSE:HD) has made 3,000 of its workers millionaires.

Nevertheless, Sanders wants to eliminate billionaires. All of them. If elected, the Forbes 400 Richest People in America would be decimated.

It is estimated that the maximum tax rate on the wealthy would rise to 97.5% through a variety of income and wealth taxes.

Sen. Elizabeth Warren says she believes in markets and is a capitalist, but she also wants to raise the tax rate and impose a wealth tax on the well-heeled.

In the latest Forbes 400 issue, Steve Forbes called this wealth grab “the road to serfdom”:

“Wealth taxes would be an unprecedented assault on people’s privacy… Government bureaucrats would have the right to demand lists of all your assets — as well as the right to examine your home, storage facilities, brokerage accounts, bank accounts and everything else — to determine if you have crossed the wealth-tax threshold. They would, at a click, have — for the same purpose — access to the records of everything you have bought or sold.”