Why Gold and Silver Outperformed This Year

“You’ve endured the pain, why not enjoy the gain?” — Rick Rule

Gold and silver have taken off in 2019 and are likely to move higher.

It has been a long time since gold, silver and mining stocks were in the limelight. Precious metals suffered through a bear market lasting eight long years (2011-2019) before finally catching fire again.

Fortunately, I recommended selling gold and silver in late 2011 and investing 100% in the stock market — one of my better calls in Forecasts & Strategies.

The Agony of Defeat… and the Thrill of Victory!

I well remember speaking at the New Orleans investment conference, an annual gathering of gold bugs, back in 2016. After giving a talk debunking the pessimistic Cassandras at the conference, I was surrounded by several attendees. They said, “We’ve lost 70% of our portfolio.”

I responded in dismay, “How is that possible? The stock market is at an all-time high.”

They said, “We bought into the doomsday scenario, sold our stocks and bought the mining companies exhibiting at the conference. Our portfolio is now down 70%.”

I was dumbfounded by this double-whammy and the danger of investing too much in one investment sector, especially one as notoriously volatile as mining stocks.

I asked, “So what are you doing here?”

They responded, “We’re doubling down!”

In 2019, their long-suffering patience has finally paid off and they are now enjoying the new bull market in gold. Many mining stocks have doubled or tripled this year. The VanEck Vector Gold Miners Index (GDX) is up 40% in 2019.

I even made the plunge and recommended a mining finance company in December. We’re up 39% so far.

What Caused Gold and Silver to Come out of Hibernation?

First, interest rates have declined to all-time lows. In Europe, rates are even negative. The Fed decided to stop raising interest rates in 2019 and recently reversed its policy by cutting rates by a quarter point. The broad-based money supply (M3) is now growing at a 9%, suggesting that easy money is back. Since gold and mining stocks pay very little interest, gold has begun to look more attractive.

Second, the Trump trade war has destabilized the global economy and created an economic crisis. Gold thrives on uncertainty and instability.

Third, gold and silver look cheap compared to stocks and real estate, which have climbed to near record levels.

Recently Mark Mobius, the former long-time manager of the Templeton-Franklin Emerging Markets Fund, said that gold was clearly in a bull market that could last for years. 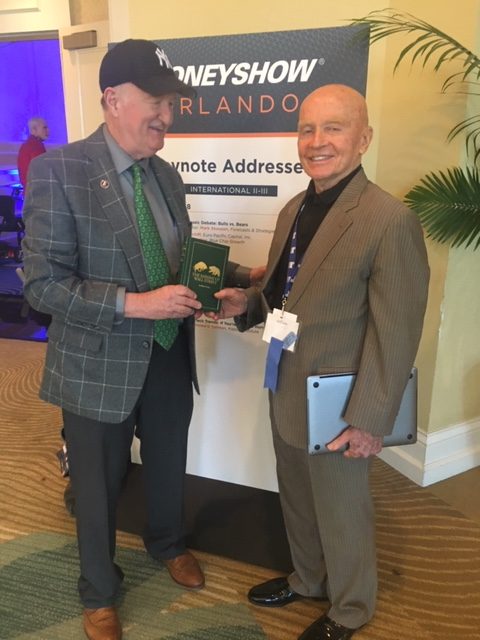 Mark Skousen and Mark Mobius hold a copy of “Maxims of Wall Street” at the Orlando Money Show earlier this year.

Last week, Mobius urged investors to buy gold “at any level.” He added that, “Gold’s long-term prospect is up, up and up.” Mobius noted that the money supply is “up, up and up.” Indeed, with the Fed cutting rates and M3 rising 9.3% lately, “There’s going to be a demand for real assets, and that includes gold,” Mobius said.

Admittedly, the easy money has been made, but there’s still more profit ahead.

Just don’t go overboard. Invest up to 10% of your portfolio in gold and mining stocks. Don’t be like those investors who invested 100% in penny stocks.

And this year may be the right time to go to the New Orleans gold conference. I’ll be there along with the usual suspects like Doug Casey, Adrian Day, Brien Lundin and other gold bugs. For further information about the conference, click here.

P.S. Mark Mobius is a big fan of my classic book, “The Maxims of Wall Street.” It is the one and only compendium of financial adages, ancient proverbs and worldly wisdom — it has sold over 25,000 copies. It is Warren Buffett’s favorite quote book, and Alex Green calls it a “classic.”

Commodity guru Dennis Gartman says, “It’s amazing the depth of wisdom one can find in just one or two lines from your book.”

The book has individual sections on gold and gold bugs, growth vs. income stocks, contrary investing and over 800 adages, proverbs, stories of famous financial gurus and worldly wisdom.

It’s not available in bookstores, and Amazon charges $24.95. But “Maxims” is available directly from me for only $20 for the first copy, and all additional copies are $10 each. And if you order an entire box of 32 books, you pay only $300. Plus, I pay postage and autograph each copy. It’s the perfect gift for investors, clients, money managers, and stockbrokers.

Philadelphia MoneyShow, Sept. 26-28, Philadelphia 201 Hotel: I’ll be making a special appearance dressed as Ben Franklin! Other speakers include Ken Fisher, Dennis Gartman, Tom Sosnoff and John Buckingham. You can obtain free admission to the MoneyShow as my guest by calling 1-800-970-4355 and by mentioning pass code 048316.

Gold is back! Join me for the New Orleans Investment Conference, Nov. 1-4, 2019, Hilton Riverside Hotel. Speakers include Dennis Gartman, Kevin Williamson, Steve Moore, Rick Rule, Mary Anne and Pamela Aden, Doug Casey, Adrian Day and Peter Schiff. This is the granddaddy of gold bug conferences and I’ve been speaking there nonstop since 1976! All the details can be found here.

Was Slavery the Foundation of Our Nation?

In memorializing the 400th anniversary of the arrival of the first African slaves in Virginia, The New York Times has begun the 1619 Project, whose goal “is to reframe American history, making it explicit how slavery is the foundation on which this country is built.”

Say again? Certainly, the evils of slavery represent part of our history, but to say it served as the foundation of our great country is a shocking exaggeration.

At no time did slavery represent more than 15% of the labor force in the United States, and that was primarily in the South.

As Richard Rahn declared recently, “Only in the Southern states did slavery persist, mainly because the economic system of the South was more akin to feudalism than free-market capitalism. Plantation agriculture — mainly cotton — had considerable economies of scale and required large amounts of unskilled labor. Huge profits went to relatively few large landowners because they were in effect paying less than the free-market price for the labor.”

Richard pointed out, for example, that New York State’s Erie Canal construction, which represented the biggest public works project of its time, was hand dug primarily by Irish immigrants, not slaves.